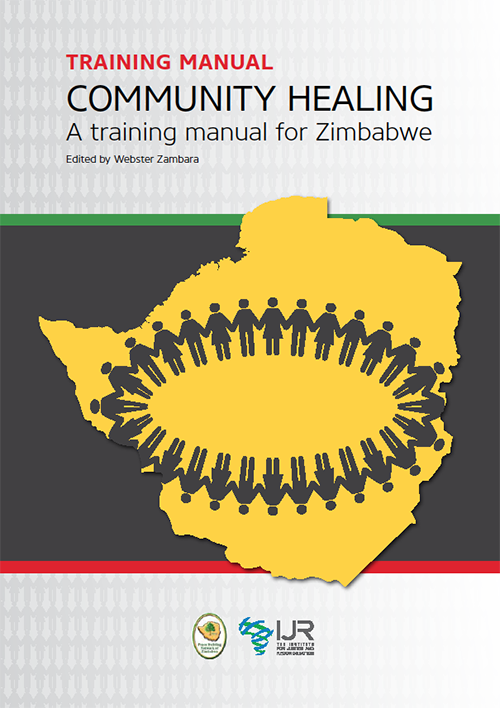 Since 2013, the IJR’s Justice and Reconciliation in Africa (JRA) Programme has partnered with the Peace Building Network of Zimbabwe (PBNZ), a network of 19 local nongovernmental organisations (NGOs) that are involved in community peace building activities across the country, in order to develop a community healing manual that will standardise and strengthen efforts involving community healing processes in Zimbabwe. The manual, whose modules were written by Zimbabwean peace workers who are members of the PBNZ, is the outcome of three successive workshops conducted in Zimbabwe over a period of two years in which modules were drafted, presented and revised, with such workshops culminating in a training-of-trainers workshop designed to create a core group of ‘reconciliators’ from the membership of the PBNZ.

The idea of a training manual emanated from the realisation that violent conflicts result in dysfunctional, wounded and divided communities that are trapped by fear, anger and all forms of social ills that create a breeding ground for fresh cycles of violence. The manual was produced to enhance the capacity of members of the PBNZ in their peacebuilding work by way of a bottom-up approach that also seeks to complement the role that will be played by the National Peace and Reconciliation Commission (NPRC) and other local and national processes.

Specifically, the manual is intended to develop the capacity of members of the PBNZ intheir efforts to heal communities devastated by political violence, as well as by future instances of violent conflict, so that peace can be sustained in Zimbabwe. It is therefore a tool to be used by civil society and other development workers to assist communities to draw a line under their past experiences of political violence and rebuild relationships based on peace and development.

The manual uses simplified language necessary for community work and equips the trainer with knowledge and skills, as well as with a variation of methodology, relevant for specific modules so as to save time when preparing for training sessions. At the end of each module, there is a list of references for conducting further research on the concepts discussed, when required. The manual is designed as a total package for fieldwork whose methodology promotes participatory training and facilitation that will capture the participants and keep them engaged, while at the same time leveraging their own existing knowledge to enable them to become part of the community healing process. 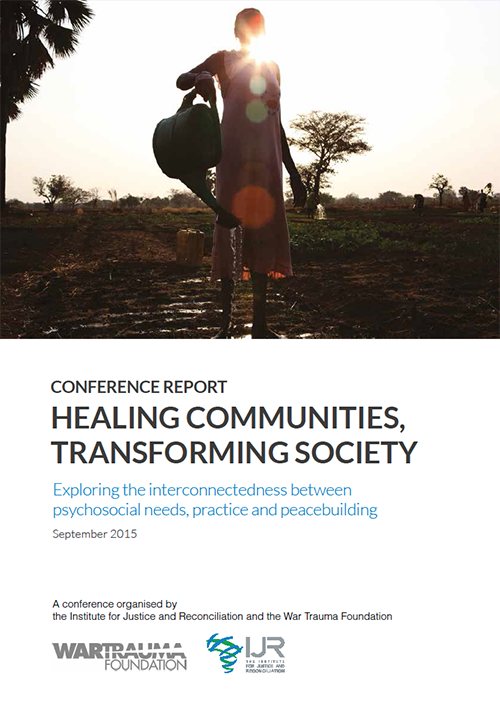 Exploring the interconnectedness between psychosocial needs, practice and peacebuilding

From the 6th to the 8th of May 2015, the Institute for Justice and Reconciliation (South Africa) and the War Trauma Foundation (Netherlands) hosted a conference attended by 52 individuals from 15 countries around the world that explored the nexus between psychosocial needs, practice and peacebuilding in the aftermath of conflict.

Based on years of experience in the field of peacebuilding (by IJR and its partners) and a long trajectory of developing, implementing and analysing mental health and psychosocial support (MHPSS) projects around the world (by WTF and its partners), the two organisations partnered in bringing together academics and practitioners from both fields to explore ways in which the nexus between MHPSS and peacebuilding could be better understood. As such, the programme was structured in such a way that practitioners could share their experiences (best practice and challenges), academics could put forward their existing research and the group as a whole could explore ways in which the two fields could begin to be brought closer together in order to contribute to the development of more sustainable and holistic interventions.

This report is a summary of the dominant themes that emerged at the conference and that cut across presentations made by practitioners as well as researchers and academics. In order to lay a foundation for the path ahead, some of the main concepts that were used at the conference and that have widely diverging definitions have been briefly outlined with the purpose of finding some level of consensus. Defined concepts include different forms of violence (direct, structural and cultural) and how they impact on society and intersect with MHPSS and peacebuilding work, individual and collective trauma, as well as the intergenerational transmission of violence and trauma. The composite term mental health and psychosocial support (MHPSS) is unpacked alongside relevant concepts such as social suffering and healing as well as resilience. Finally, this section defines some of the key elements of peacebuilding such as a reconciliation, transitional justice, restorative and retributive justice and social transformation. The final part of this section explores the linkages between MHPSS and reconciliation and underscores the importance of healing to take place in order to enable reconciliation, and vice versa.

Despite the varied profile of participants and presentations, a number of dominant themes emerged at the conference that are central to articulating the interconnectedness between psychosocial needs, practice and peacebuilding. These themes include recognising the centrality and complexity of context, being sensitive to the cultural construction of ‘mental health’, understanding and building on local resources, clarifying the role of narrative in memory formation and identity, the trickledown effect from wounded leaders to local communities, using dialogue as a foundation for healing, the impact of (sexual) gender-based violence on health and peacebuilding and finally, understanding the intergenerational transmission of violence and trauma on peacebuilding efforts.

Finally, in order to begin building a conceptual framework that bridges MHPSS and peacebuilding, the socio-ecological model is introduced. The socio-ecological model likely offers the most promising holistic framework within which to arrange the increased confluence of peacebuilding and MHPSS activities. This comprehensive approach recognises the importance of the individual while placing significant emphasis on both the social context and the broader environment in which individuals operate.

The report ends with a set of recommendations that include online tools to bring the two fields closer together as well as conducting further research, analysis, advocacy and capacity-building to deepen the nexus between MHPSS and peacebuilding further. 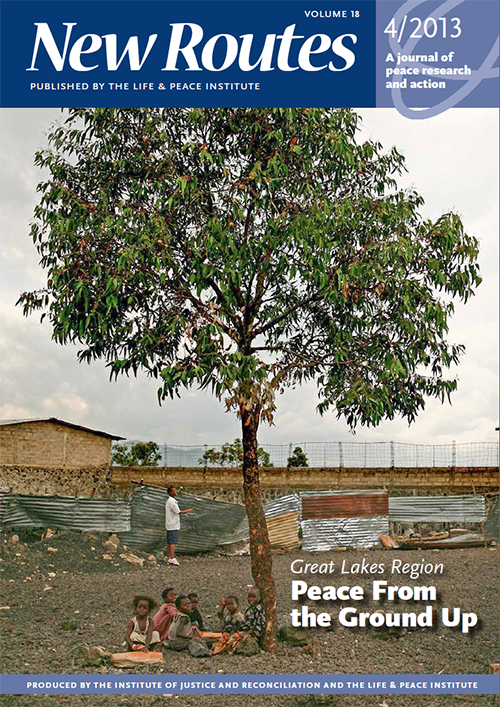 Published by the Life and Peace Institute

This new routes issue is the result of a fruitful collaboration between the Life & Peace Institute (LPI) and the Institute of Justice and Reconciliation (IJR). Based at the opposite ends of the African-European continents, we have joined efforts in presenting possible ways forward to peace in the Great Lakes Region, with special focus on the Democratic Republic of Congo.

Inspired by the IJR and Kroc conference “Peace From the Ground Up”, we give examples of theories and analyses of keynote speakers at the conference, as well as other researchers and practitioners with years of experience from the region. The process of seeking trust, justice and reconciliation cannot be imposed from above or from outside but must involve local actors and stakeholders, that is, grow “from the ground up”.

We extend our warm thanks to everyone involved in making this a very special outcome of the teamwork between IJR and LPI. 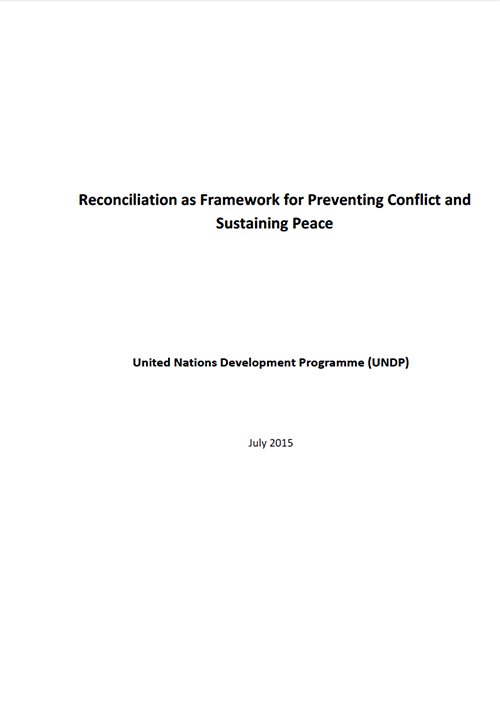 Reconciliation as Framework for Preventing Conflict and Sustaining Peace

This policy document discusses the contours of reconciliation as a framework for achieving sustainable peace. Drawing on experiences from the African continent over the past two decades, the paper outlines a future-­oriented, justice-­focused, gendered, locally-­owned and comprehensive approach to reconciliation as a critical ingredient in various processes that form part of the post-­conflict reconstruction and development agenda. These processes include conflict prevention, peace-­making, negotiation, transitional justice and inclusive development.